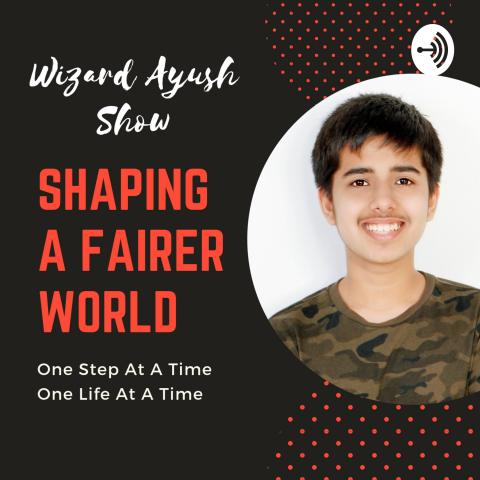 Ayush Chopra, 16-year-old Student and a Change Maker Since the age of 12, Ayush has been engaged in Human Rights, the UN Sustainable Development Goals (SDGs) and the creative methods of presenting the need to be an active citizen. He has organized activities at his school and made videos outlining a real life application of his own experiences of the benefits of education. Ayush has also delivered a powerful speech at the UN Youth For Human Rights International Summit, demanding that no one can sit on sidelines. Combined with his public speaking and his initiative of ‘SDGs For Children’, he has reached thousands of people of all ages to inspire them to learn and take action against injustice. Ayush has recently received the most the Diana Award for his exceptional work to demonstrate the ability to inspire and mobilize new generations to serve their communities. He has been acknowledged as one of the most influential young Change Maker around the world. The Diana Award is the longest running award given to the outstanding young people for selflessly creating and sustaining positive social change in memory of Diana, Princess of Wales, UK. Ayush was appointed as one of the pioneer ambassadors of the first group of ambassadors for the TeachSDGs project, initiated by the Global Goals Education Task Force, a volunteers-based worldwide network of teachers. The Global Goals Educator Task Force, in partnership with the United Nations, aims to strengthen the voice of the Educator in their sessions, meetings, and events pertaining to the Sustainable Development Goals. As a TeachSDGs Ambassador, he collaborates with Educators in the initiatives to embrace the Global Goals in their organizations and conceiving and pitching fresh ideas and strategies to the Task Force. Ayush is the young Author of book – “Shaping A Fairer World With SDGs And Human Rights.” The book is the culmination of his experiences, initiatives and intense involvement in social transformation. The book graphically disseminates information about SDGs and Human Rights with engaging design and artwork. In witty, playful and colorfully tabulated content, the book narrates his journey as well as the stories of those who have contributed towards new ideas and innovative narratives to effect real change. It has now become part of daily curriculum and used as reference material by Teachers across the globe to introduce SDGs and Human Rights to students for the first time. One of the reviews on Amazon by a Teacher in Colorado – “Shaping a Fairer World with SDGs and Human Rights” is a next generation guidebook that provides both students and teachers with a foundation to effectively engage in Vision 2030. It’s a call to action that empowers all of us to take a closer look at our role as global citizens and choose our participation point(s) and level(s). In addition to providing the history/timeline of the creation of the SDG movement by the UN, this consciousness-raising resource includes a breakdown of each SDG and its targets, relevant vocabulary and concepts, inspiring stories, globally - minded activities, interactive visualizations, awareness-building mind maps and so much more. If you care about our people, our planet, and our future, you won’t miss this book. Highest recommendation.” Ayush is the AFI (Ariel Foundation International) Youth Ambassador and Representative at UN. Ayush also has his own Podcast, ‘Shaping A Fairer World’, which he has started recently and is available on eight platforms. He created this initiative to join the dots of the Education world. He believes that no education is ever achieved unless we connect Educators, Students and Parents together. His podcast is an attempt to share the voices and the unheard stories of Educators, students and Parents across the globe. Ayush believes, nothing can stand in the way of the power of voices calling for CHANGE.

SDG13 - Climate Action And How I Help

In our #1MinutewithSDGs Campaign by SDGs For Children community, Shaurya Chakravarty from India explains his understanding of SDG13- Climate Action.  He believes in 'Action Now' and share how he is contributing to save our planet Earth and supports 'Climate Action'.